Was unlike anything I have ever experienced before. It’s has been months since I finished up my obligatory 88 days, heck its been months since I left Australia, and its taken me about that long to process it. The sick and anxious feeling I left the farm with has long disappeared, and I, think, I am finally able to look back with a clear head at what a completely mad experience it was.

I’m not entirely sure what I expected my obligatory 88 days farm work to be like. Almost every backpacker you meet in Australia will have a horror story about their time spent on a farm, and from that I had the rough idea that it was going to be awful. I knew there wasn’t a chance in hell that I was going near a fruit farm, that’s where all the worst stories come from, and I had done that in New Zealand where the pay and conditions are far and above what they are in Australia and where there are zero spiders or snakes to try and kill you. Desperate for a new adventure the idea worked its way into my head that going to live and work in the Australian outback would be a great new experience, and so after a whole heap of applications, when I was finally offered a job as homestead help on a cattle station I leapt at the opportunity. I packed up my bags and jumped on a plane with a little trepidation and a mountain of giddy excitement that I was off on a new adventure. I was heading about an hour and a half drive north of Alice Springs, to live and work right in the red centre of Australia.

Now I had spent the last month living it up drinking and socialising in busy Melbourne, and my work history is primarily working indoors in customer service roles, mostly on ski resorts. Suddenly moving to the middle of nowhere with very few people around, and having to work outdoors in the actual desert was more than a mild shock to the system.

The first thing that hit me were the flies, from the minute I stepped out of the airport it was like I was under constant attack and they only got thicker the further into the outback we got, they were always in my ears, or up my nose, I swallowed more than a fair few and coughed a whole heap back up, my fly veil became my new favourite accessory. But the flies were just the start of it.

The oppressing heat, the red dust that got everywhere and the overwhelming dryness were the next obstacles to conquer. I started to develop a strange longing for rain, even just a few drops to make everything seem a little more normal, and the heat a little more bearable. Pushing a lawnmower around, and digging holes, and literally raking shit in a kind of heat that I had had little to no experience in before nearly killed me the first week or so I was on the station. With my morning rounds done all I could manage to do was jump in a cold shower until my body temperature felt vaguely normal, down all of the water and spend the afternoon napping with the fan strategically placed directly in front of my bed. Gradually though I got used to it, and the problem became not how to deal with the physical difficulties this environment created but the mental ones.

My job meant that I worked four hours in the morning, had six hours off in the afternoon and then did another couple of hours in the evening, giving me a whole afternoon by myself with nowhere to go and nothing really to do. Australian daytime TV is I think, if possible even worst than British, I re read nearly every book in my extensive kindle collection and even Netflix started to lose its shimmer after a while.

Spending so much time in your own company with so few distractions, you get to know yourself exceptionally well, and to be honest I didn’t really like myself for a little while there. I for the most part like to think I’m a pretty decent person, but with so much time on my own all my little flaws began to irritate myself. My mind was a constant stream of swirling questions. I’ve always thought I was hard working, but here it just seemed I was continually doing a bad job, am I actually not? I know I’m shy and reserved to start with but am I actually hard to like? Uncomfortable to be around? Should I say more? I’m kind of proud of my intelligence, I eat up knowledge on all kinds of random topics and I love a good heated debate but does that make me quite smug? Do I try and show off with my intelligence? Should I say less? And why oh why was I being so damn lazy? I had free time and no distractions, why wasn’t I getting on with one of the many projects from the list I’d been compiling in my mind? Am I actually just going to keep floating through life and not actually ever do anything or achieve anything? After a while that tiny whisper that I might actually be a bad person started to grow into a yell, and eventually, I started to believe it. I struggled to sleep or relax or let myself open up. When I finally came away from the farm I was questioning every aspect of myself completely.

What made everything so much worse was that there was nowhere to escape to. I was always at work. We all know after this past year what it’s like to be stuck with the same people day in day out, now imagine not being in lockdown with your family or partner or friends, but with your employers and six strangers.

My friend told me the night before I left Melbourne that no matter how nice the station managers sounded on the phone they would end up being fuckers when you got there. To start with though, it actually all seemed pretty ok, everyone rubbed along just fine. However, as will be the case when you have ten people living and working all on top of each other all of the time, the cracks will begin to show. And for someone who doesn’t like conflict and will go actively out of their way to avoid, my stress levels went through the roof. There was a constant current of tension running underneath and it felt as though there were more than a few underhand games and power struggles being played, there was something dodgy going on with the pay and I’m still not entirely sure exactly who was trying to get who fired. Thankfully I found allies in my fellow backpacker and an Australian family who found the whole situation quite as bizarre as I did, and nightly chain smoking, bitching sessions became our standard get through it routine. Eventually in that final week it all exploded. Having basically been told to leave because my three months were done, I set my leaving date so I could start my journey back to the snow. The Australian family gave their leave as well having reached the end of their tether, and loathe to be left by himself and having also effectively been asked to leave due to an injury making him unable to work, my fellow backpacker also decided to head off the same day as us. This sent the station managers over the edge, convinced there was a conspiracy against them, and with an explosive row on the Thursday afternoon, we were all told to be off the station by 11am on Saturday. My nerves were shot, I don’t think I breathed properly between the row and finally driving away from the station, and it wasn’t until we were sat down having a beer in town that my hands stopped shaking.

For fourteen weeks I felt like I was constantly on the edge, and I left the outback emotionally drained and even more of a hot mess than usual. The effects of which I don’t think have quite left me. My confidence is not the greatest when meeting people in the first place, but it took a really jarring knock and in the ski season that followed my time in the outback I struggled in a way I never quite had before to be comfortable around people, it took right to the end of the season to loosen up and feel more like myself again. And those little voices in my head telling me I’m a bad person still like to pipe up awfully frequently, I still almost nightly have to listen to a podcast to distract myself from my thoughts and fall asleep. So yes to sum it up doing your Australian farm work time is pretty damn hard.

But in amongst all the chaos, the bitching, my complete breakdown and the insane heat, there were some moments of pure joy. Because as with all bad things, there was some real good amongst it all. When we were sat around a bonfire listening to country music and swigging beer, when we cooked up bacon sandwiches on the barbeque after watching the sunrise on Anzac day, when a few of us spent the night away from the station camping out under the stars, and when the scared little calf that wouldn’t come near anyone walked over to me for a cuddle. At these moments I couldn’t imagine being anywhere else. I mean, we had ourselves a mini rodeo on Easter Sunday, because apparently that’s what you do there when you want to have fun weekend off, how’s that for a once in a lifetime experience.

Life in the outback can, in a way so unlike anywhere else, be completely magical. It is hot and dry and dusty yes but it is so so beautiful. The stars are so bright, the blue of the sky against the red of the ground is stunning, the calves (or poddies as is the correct local term) are so cute, and the cold beers never tasted so good. Despite how unbelievably hard it was, I cannot explain how grateful I am to have had this experience. My twelve year old self who could only dream about going to Australia would never have believed that not only would I get to visit but I would get to live and work in the middle of the Australian outback. I will never ever do it again but what a truly wonderful story to tell the kids someday! 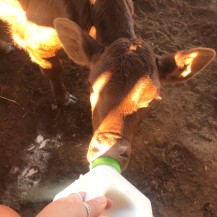 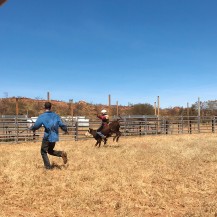 I’m Kate. I’m thirty and still trying to figure what I want to be when I grow up.

Originally from Yorkshire but normally found living out of a backpack in some far flung corner of the world.

I love a good adventure, a good book, a good netflix binge, a night at the theatre, singing badly to musical soundtracks, and food especially cheese and especially accompanied by wine.

When: As soon as the borders open… currently stuck in the UK spending the pandemic watching netflix and drinking gin in bed!